All teachers learn as they teach, but sometimes we lean a little more into the learning. This week the Oaks taught us how important ritual and routine are to young children.  We knew this of course; it’s one of the reasons we set up our Hilltop Home and do a circle meeting and storytime every day. It’s why we use a chime and name-stones, a song and a share as part of our circle ritual. That’s part of what makes Forest Kindergarten school rather than just a romp in the woods. 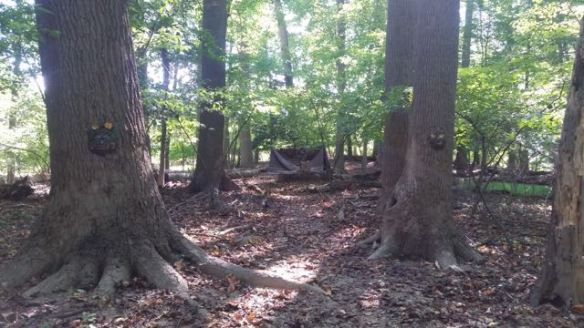 The entrance to magical Hilltop Home 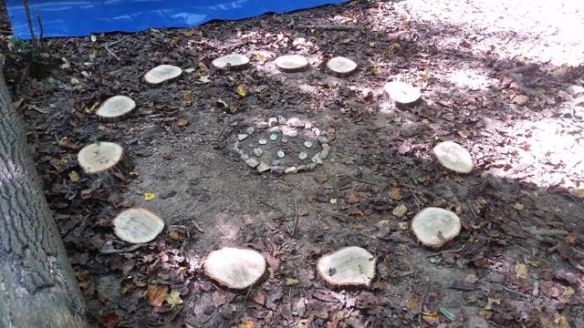 But this week we got ambitious. We had Big Plans, and since time goes too fast and there’s never enough of it, we thought we could move part of our ritual (circle and story) out of Hilltop Home to save some time for the Plans. Hilltop is, as the name suggests, at the top of a hill that takes some time for small legs to climb. And there’s the wagon.

So we spent a day at the bamboo grove behind the preschool. We did our circle and story at a lovely circle of stumps. This first day the children were flexible. On with the day- our goal was to make a raft that we could test in the pond. (Also to see how hard it is to harvest and tie bamboo, as we plan to build our shelter with it).  I cut pieces of bamboo, the Oaks trimmed them with our bow saws, measured sort-of equal lengths, and then a few helped tie the bamboo together with twine. Others went to explore the bamboo, climb trees, play with potion bottles and build a parking structure for the wagon. Even the ones who weren’t actively building the raft kept stopping by to check on it. And when it was done, in the nick of time, they all proudly carried it out to our dismissal spot to await the next day. The raft-carrying took some serious coordination and communication, all managed without our help. 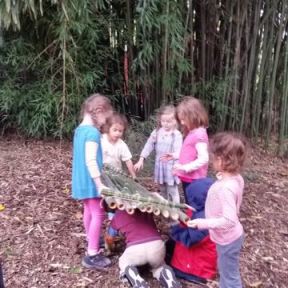 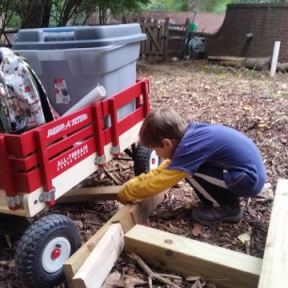 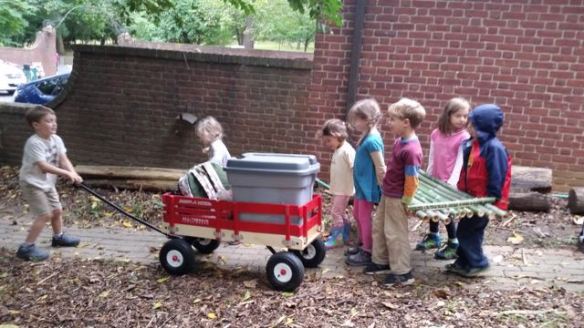 The next day, we made the trek to Hilltop, leaving the raft next to the trail junction. After circle and story (The Raft, by Jim LaMarche, our longest story yet), we headed to the pond. The Oaks made guesses about whether the raft would sink or float. They were divided. A third said it would definitely float. A third said it would float first and then sink, and the pessimist third assured us it would probably sink. The children suggested we tie a rope to the raft first, then we scouted the pond for the least muddy, most solid point of entry. The pond this time of year is really a giant mud puddle. Together they launched the raft, into the mud. They realized they needed long sticks to push the raft out into the water. And VOILA! Floating raft! They then hauled it back and began searching for branches and logs to load on top, to see how much it could carry. We vetoed a suggestion to send a child out to see if it would sink. They did experiment with standing on the raft at the water’s edge (on top of mud), and learned it would hold one, but not two Oaks. We talked about the differences between our raft and the raft in the story, which easily held a boy and his grandma. I have done this STEM activity with tin foil rafts in a basin of water in a classroom, and let me tell you, this was way more fun. And muddy. 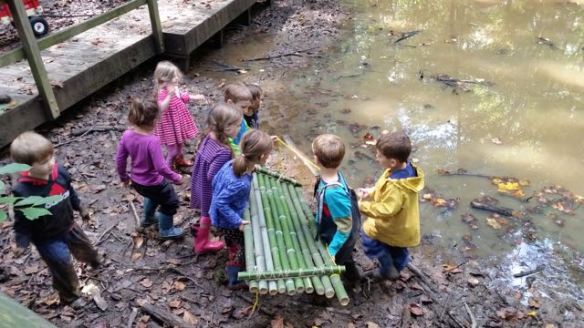 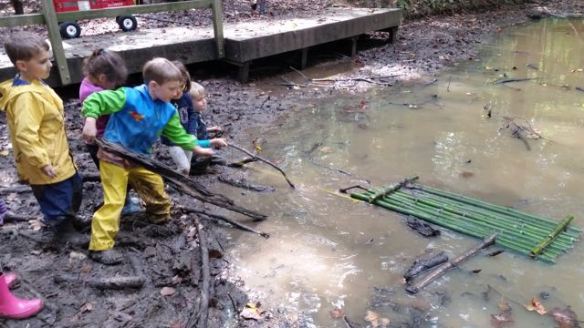 It needs to go farther 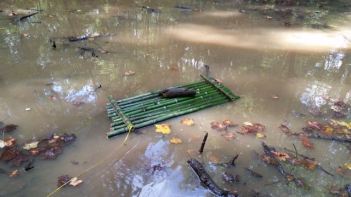 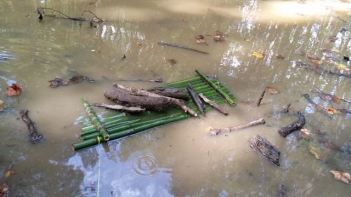 Look how much it holds! 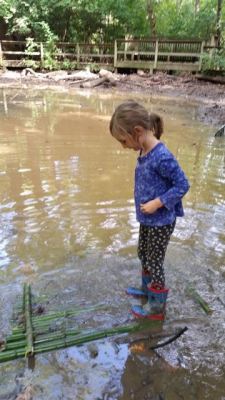 On with the Plans. We wanted to do an Animal Homes Scavenger Hunt, to find the homes of their symbol animals at Woodend. We’ve also been experimenting with reading longer picture books, to test their readiness for chapter books. But there’s that pesky time issue. Their parents want them back; our own children want us back. The day has to end. It was a nice rainy day, so we ate up at the covered picnic tables and decided we could just do circle and story there (Miss Suzy by Miriam Young, about a squirrel who loses and then regains her home), then head out on our hunt. There were twelve animal homes to find and we knew we needed to loop through the Meadow, a section of forest and past the Pond to find them all. So, we held circle in our lunch spot. It was unsettling. Lots of extra energy, jostling,  distraction and opposition. “Are we ever going to go back to Hilltop Home?” one asked plaintively. 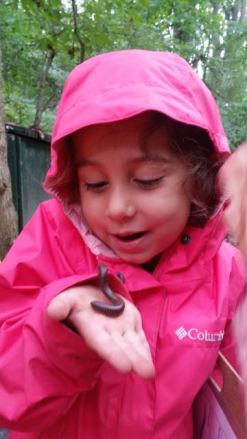 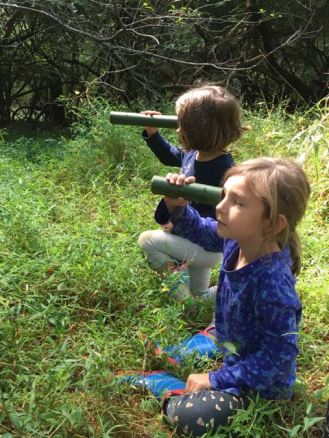 Looking at deer with bamboo scopes

So we planned to spend Thursday at Hilltop, without Big Plans. They needed it. There had been too much disruption to our newly-established routines and too much teacher-direction. They were missing the structure of their routine, but at the same time, feeling too constrained by our more directed activities. They needed to climb that hill, play and explore. Then, that morning, the weatherman predicted strong thunderstorms right during the Oaks class. The radar map showed dark green, orange and yellow. With lightening we have to be inside. Plus their rain gear was soaked from the morning class. So we headed to the Mansion, which we had hastily provisioned. We made it through a fidgety circle. We read another longer story (Clever Beatrice by Margaret Willey –  a traditional story about a little girl outwitting a giant). Then the children brainstormed about our shelter designs, in both a group and in their journals. Chelsea demonstrated how a roof works with a bin lid and zoobs. Their ideas included a ladder to the roof, a bathroom, doors, windows and a floor. Then our time was up. Just in time – they were ready to run!

On Friday we took advantage of all that rain to go on a very successful mushroom foray with Audubon’s School Programs Director Serenella Linares (aka Mushy). 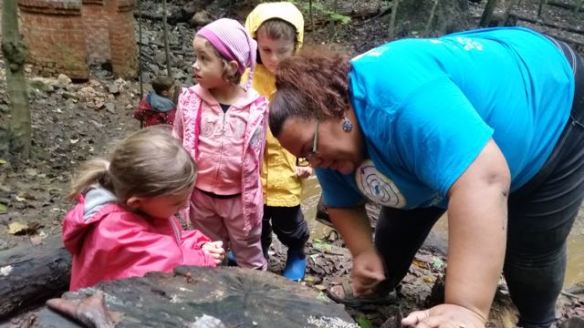 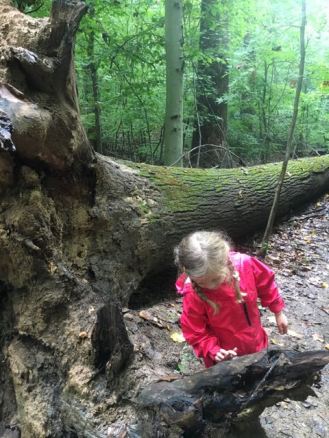 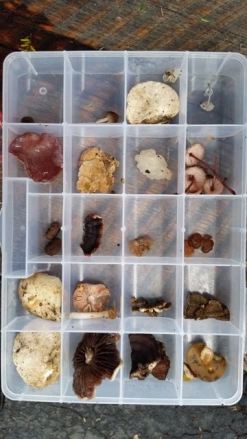 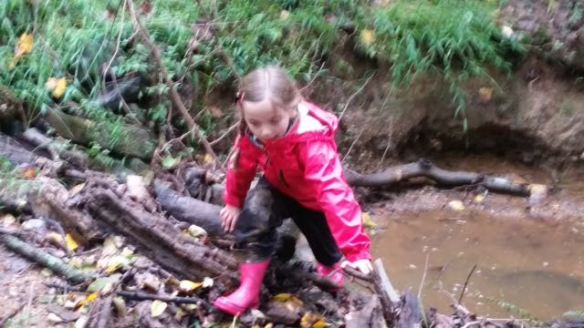 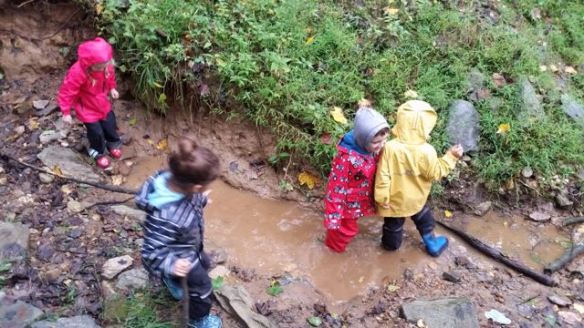 Nothing better than a puddle

Woodend rang with the happy yells of “Mushroom!” as we found one after another. “They’re everywhere!” A favorite was the “bleeding fairy helmet” or mycena haemotopus, with a stipe (stalk) that “bleeds” red. After working up an appetite finding mushrooms and splashing in the creek, we tried oral story telling while they ate their snack (a version of the Sioux legend Iktomi and the Eyeballs). Rapt attention. Then, finally, finally we got up to Hilltop Home. The relief was palpable. We were home. 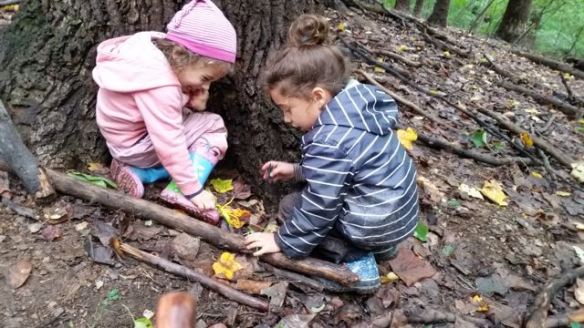 Sometimes we need to listen to the lessons in the simplest of stories. Our first book this week was Shh! We Have a Plan by Chris Haughton. The characters hatch ever more complicated plans to catch a brightly colored bird. The littlest character ignores the plans, and eventually befriends all the birds with an offer of crumbs. Sometimes in order to teach well, we need to let go of some of our best-intentioned plans and follow the children.