The Nature Detectives have spent the past two weeks doing what they do best, exploring nature at Woodend…except with a twist, and a trip down a time tunnel to the age of dinosaurs! You may not know, (or were recently informed by a small child) that millions of years ago Maryland was home to dinosaurs, (triceratops on the beltway!) and even though dinos were here long, long ago, there are still distant relatives of dinosaurs and a few living fossils right here at Woodend that we can explore. 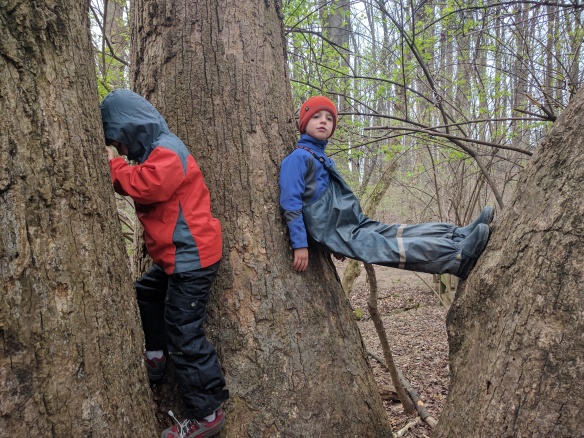 Putting the Spy in Spinosaurus

We began our dino exploration by talking about how dinos and birds have a lot in common, and are more closely related than one might imagine. Egg laying, foot shape, feathered bodies, the power of flight are a few connections the two creatures share. With these dino-bird connections in mind our Naturalist, Blue Crab led us to a cache of hidden snake eggs to talk about these connections. 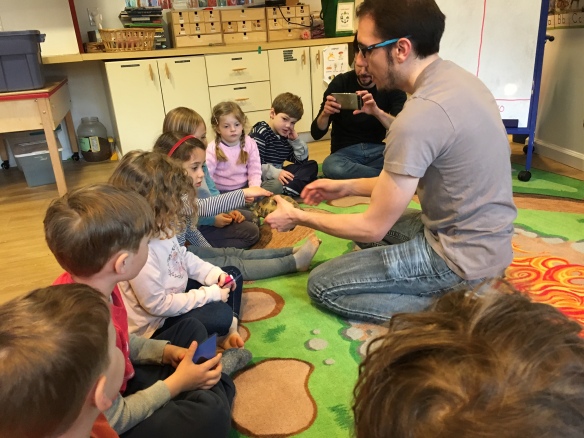 Boris the Tortoise in the classroom!

Boris the Tortoise on our hike!

The fun really erupted when Nature Detectives constructed their very own volcanoes near the bamboo forest, then filled them with red watercolor paint, baking powder, and vinegar then stood back and watched as the lava flowed down the mountainside! There was more great dinosaur fun to be had outside as buried dinosaurs were found in the sandbox, games of dino hide and seek were played at the bird blind, and baby dinos were hatched out of ice cubes. 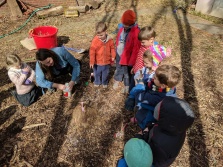 On their latest hike with Blue Crab, the nature detectives searched around Woodend for living fossils, (plants and animals that were around in the time of dinosaurs). They found ferns, moss, looked for salamanders and got to meet Boris the Tortoise who is another distant relative to dinosaurs. The Nature Detectives capped off their outdoors dino-adventures by going on a dinosaur hunt to find some hidden dinosaur toys around the trails.

News From the Classroom:

With the dinosaur exploration in full swing, the Nature Detectives found that every corner of the classroom was covered and smothered in dino-goodness. They found dino books in the Book Nook, a dinosaur island in the block area, T-Rex footprints covering the carpets, a mini dino world in the Discovery Table, a Paleontologist work site in the Dramatic Play, and bones and treasure in the Lab Table. They also got to explore some cool animal x-rays on the light table and use pattern blocks with the playdough to make dinosaur creatures. 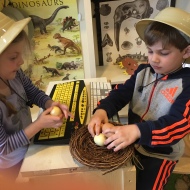 A quick visit to the cubby room or classroom will show that the Nature Detectives were also quite busy on the artistic front these past two weeks as well. There is an amazing, creative and hilarious dinosaur museum display in the cubby room of real and fantastical dinos the kids drew. In the classroom, the kids quickly filled our two new bulletin boards with art. There’s dinosaurs with pasta skeletons on one and dinosaur footprint paintings on the other.

The Nature Detectives also made their own triceratops masks, made fern prints with Ann-Mari, and worked on Dinosaur Journals as well! Additionally, the kids also made nests for dinosaur eggs with the blocks, started a new daily question answering activity at circle time, and created dinos, robots, spiders and more with the zoobs.

This eggcellent nest is no yolk.

If all that wasn’t enough, the Nature Detectives learned about their Brain House on Mindfulness Monday, had their regular, exciting weekly visits from Ann-Mari and Ms. Susan and to add in an extra dash of fun and youthful energy, the Oaks and the PM nature detectives had a special visit from Sam, a volunteer who has been helping out for the past two weeks. Sam’s vast wealth of dinosaur knowledge, dino games and willingness to give epic sled rides in the kayak has added an extra dimension of fun to the dinosaur unit. We’ll miss her for sure and hope she comes for a visit soon!

The little baby dinosaur climbed up to the top

of a volcano that was ready to pop

out came the lava so very very hot

and the little baby dinosaur ran home without a stop!

some ran fast and some ran slow

some ate plants and some ate meat

some were fierce and some were sweet

some that ran and some that flew

dinos, dinos we love you!

T Is For Terrible by Peter McCarthy

Fossils Tell of Long Ago by Aliki 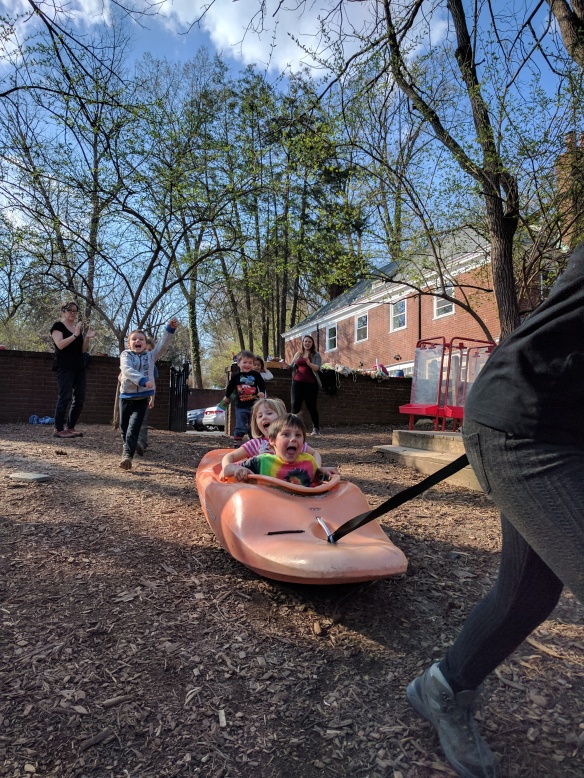 Next week we’ll prepare for our Celebration of Spring