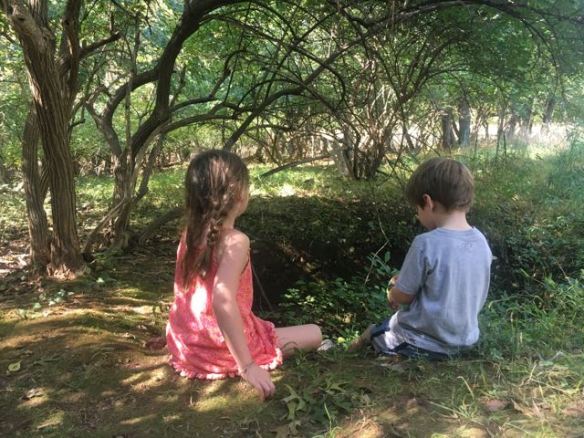 Where they’re meant to be – outside

Sometimes seeds are planted, but take some time to germinate. And then suddenly, there it is, something new growing, sometimes slowly, sometime as fast as Jack’s beanstalk. As teachers, we bring ideas to the children in so many ways. We plant them in the stories we tell and read, in conversations at lunch or while walking through the woods. We plant ideas through the places we choose to explore together and what we observe and do while there. We bring new loose parts or tools to Hilltop Home and say, “I wonder what we could do with this?” And sometimes we don’t say anything at all. We just do something different and the children notice. And then the ideas bubble and boil. They mix with ideas from other children, they grow and change. New stories arise and the play follows. 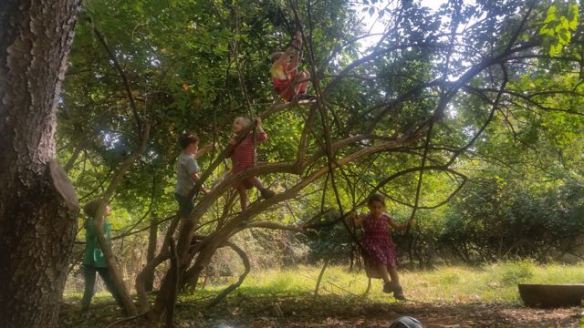 Who needs plastic play equipment when you have a bush honeysuckle jungle gym (also occasionally a fire station)? All it took was pointing out a vine swing to turn this weed tree into a lunchtime destination.

This week, something magic happened. A child who has mostly been an alone player started initiating dramatic play and inviting other children into his play. “This is a Wheat Store!” he announced after lunch, pointing to a stand of tall seeded grass. “Do you want to see where you can collect the wheat?” And of course they did. Soon five children were collecting, grinding and transporting and trading wheat. 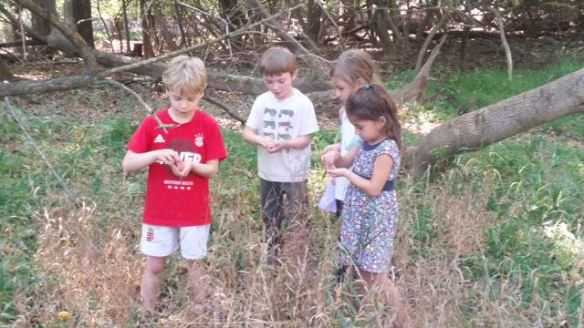 The Wheat Store entrepreneur explains how to harvest seeds

He had combined two ideas. Last week at the Twisty Tree Workshop, I quietly collected these same seeds and demonstrated how to grind them on a stump and carry them on a leaf. The Wheat Store child did not play, but he watched. In the Saplings morning preschool, they have been playing Farm Stand, and on Monday, I told an All Together story about the Oaks starting a store (the story mentions each child by name). Ideas started germinating for bakeries and potion labs, with golden nuggets for cash. 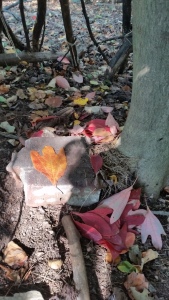 Leaves collected for use as money

More than the specific idea of Wheat Store, was the idea that playing with other children in collaborative dramatic play could give him more than building alone. A child proposes an idea and others join in. The very next day, the Wheat Store entrepreneur told the girls engaged in small-world play with toy forest animals, “I built a playground for your animals – do you want to see it?” And of course they not only wanted to see it, they wanted in on that play. Tiny playground was an idea Chelsea had helped develop several weeks before.

Children this age need social dramatic play. It’s where they develop language and connecting ideas that they build with other children. Collaborative play requires negotiation, problem-solving and self-regulation. It’s also how children internalize the components of story through play – rich dramatic play has characters, a setting, troubles, and maybe resolution…or maybe not (the game ends if the story ends!).  This is a weightier part of emergent literacy than knowing the ABCs – it leads to reading comprehension and the ability to make predictions, understand characters and think critically about a story. 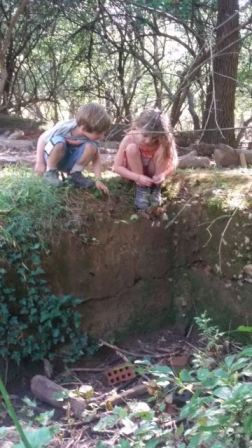 If we got in, how could we get out?

Other play arcs this week included Troll Bridge. How will the teachers and the wagon get across the bridge with all those trolls? Troll repellent! It takes a whole day to make and cure in the potion lab. Many cakes and cupcakes were also made in the bakery. One of the best things about teaching 100% outdoors is there is an endless supply of the best loose parts. Rotting log makes excellent chocolate cake batter when mixed with water. Acorns and small stones can be ingredients or decorations. Plus, no need to clean the classroom afterwards! 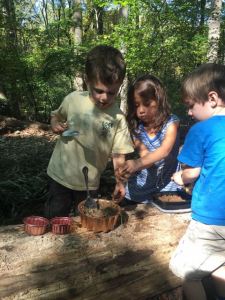 The bakery starts with three cake-makers… 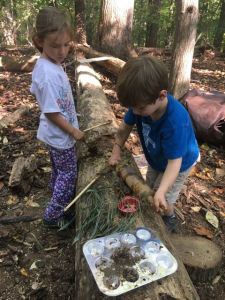 Loose parts include mud, grass, acorns, stones – plus some tools that signal cooking. 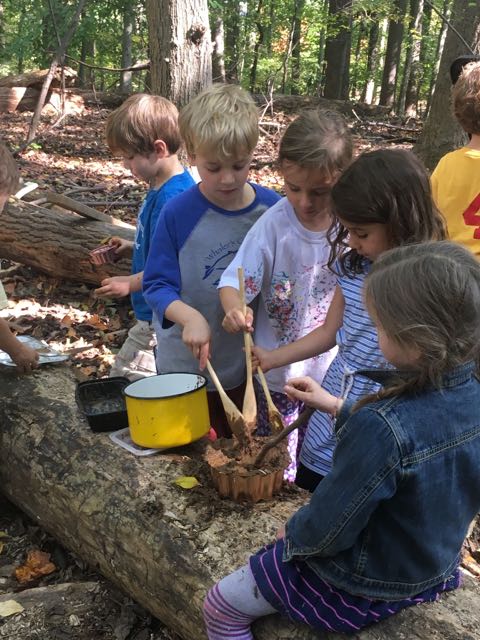 Soon the kitchen is chock-full of chefs

We also continued our exploration of tracks by making plaster casts of tracks we found at the pond (deer and dog), along with a few from rubber molds (raccoon and BEAR!). 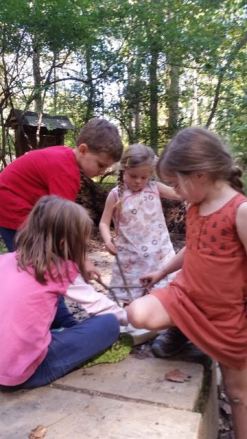 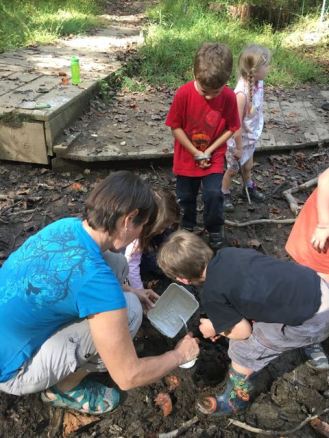 Making the casts in the pond mud 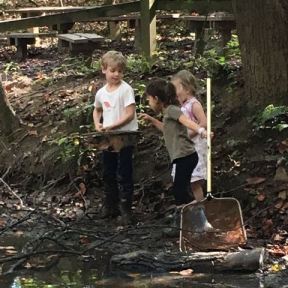 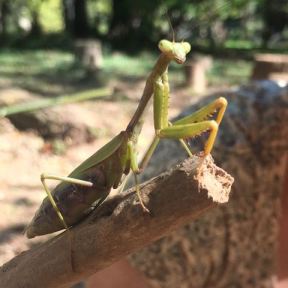 On Wednesday, after reading Leaf Man, we collected leaves and made our own leaf creatures – leaf men, leaf girls, plus a leaf unicorn, leaf dog, leaf ninja and leaf dinosaur. The children drew the tracks they imagined their leaf creature would make. 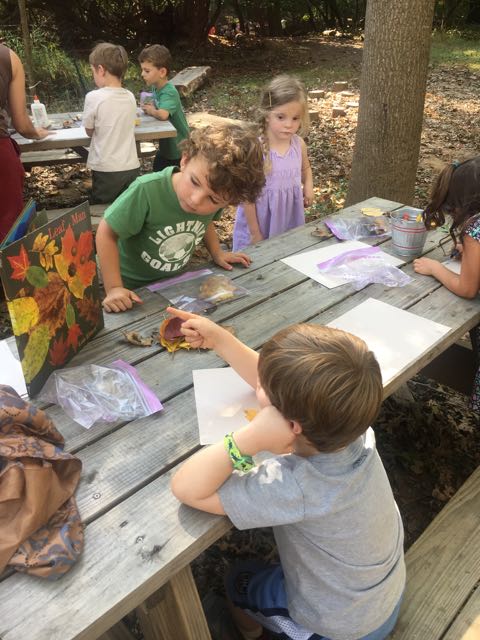 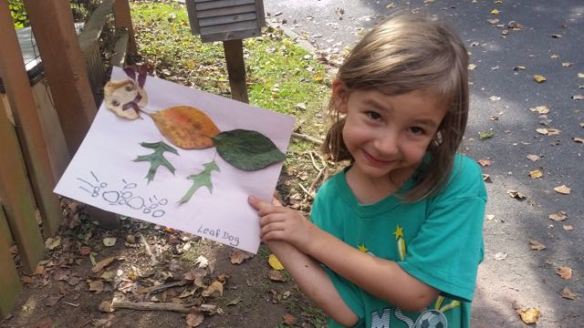 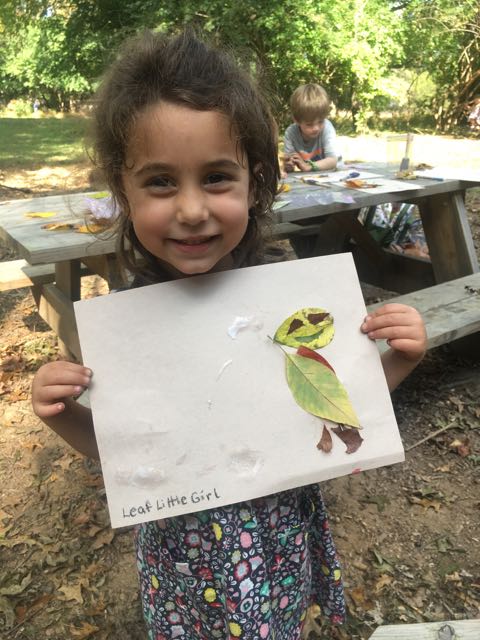 Work continues on the mini-shelter, at the rate of about one bamboo pole a day/week. Hilltop Home offers the children time to follow their own interests and engage with others in free play, so there are many projects and play arcs. One child might spend the entire time working on lashing two sticks together (trial and error), while others try out different activities with different friends. 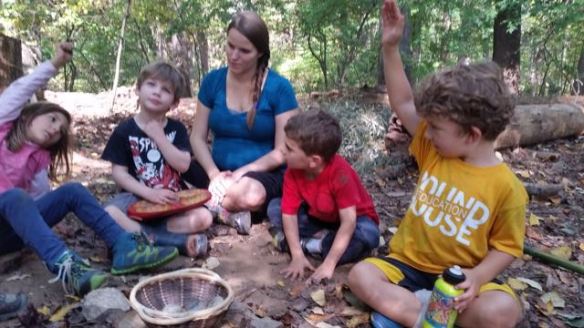 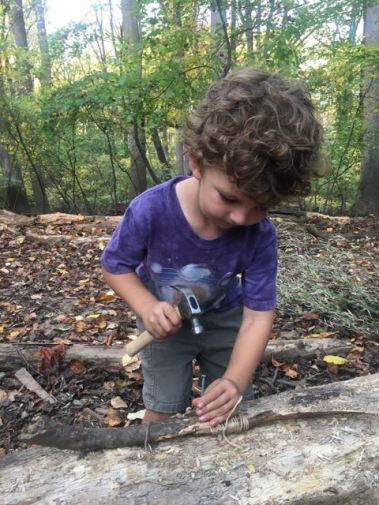 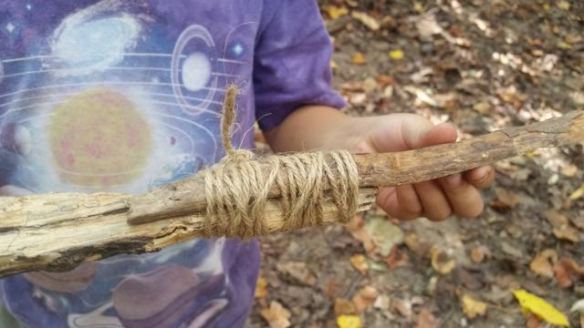 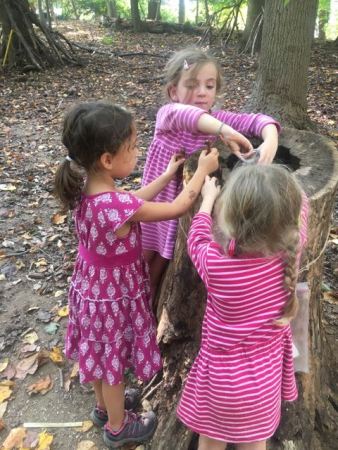 Circling back to the garden metaphor – sometimes all it takes for magic to grow is to give children fertile ground. Offer an idea, change something in a subtle way, give them loose parts, read them a story. Then watch it bloom. A bush honeysuckle becomes a jungle gym, soil divets become cake ingredients, nuts become money or marbles, grass seeds become a window to a world of play. 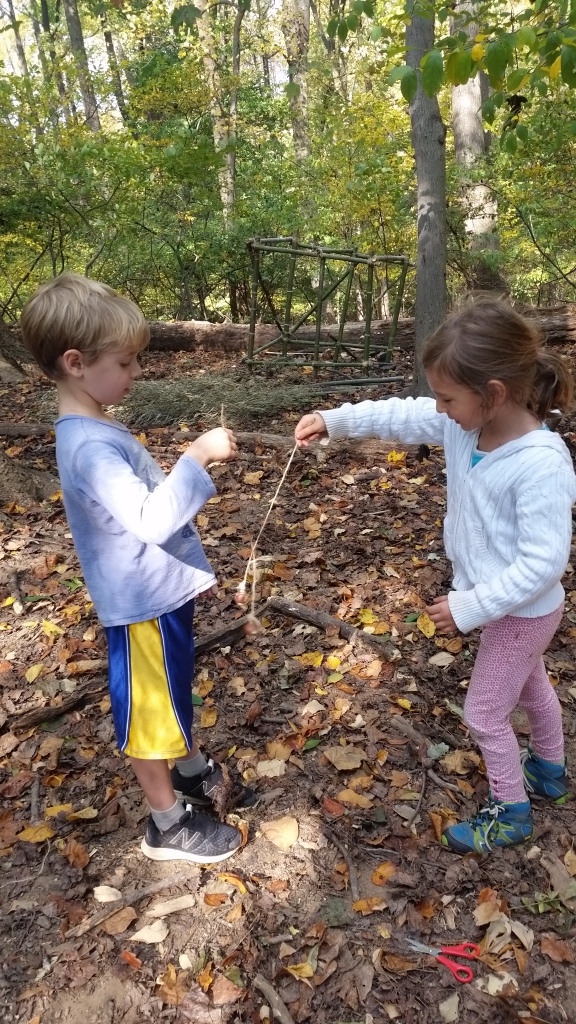 Playing “Conkers” with chestnuts on strings 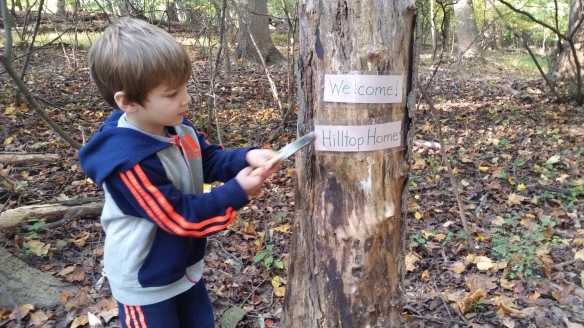 The Oaks Start a Store (All Together oral storytelling)